Tetris is an independent music club located in Trieste (Italy). Staffed only by volunteer workers, its statute is based on ‘non profit’ and ‘do it yourself (DIY)’ mentality. Being myself a long time goer of the club I was involved in the creation of the 2012/2013 season’s identity. We decided to design with an imaginary that plays with a soft and smart reinterpretation of the club mark/logo (a T composed by four squares). We made some 3D perspectives of that mark, making it a kind of brick, similar to those found in the homonymous game ‘Tetris’. Later we used — in a game of ‘different perspectives’ — this 3D mark as a texture element. A texture that is not symmetrical, it looks pretty confused and punky, which reflects both the DIY spirit of the club and the melting pot of musical styles proposed in the various events through the season (going from black metal to hipster indie pop). The Tetris Game needs strictness to be played well; Tetris Club needs genre confusion to work well.
To empathise and highlight the events headliners, artists, dates and informations we have choosen a shiny yellow color — proposed with some hatches — used as a covering over the texture in black and white. A signal color that contrasts with the dark environment inside the room.
The typography used is simply and clear: a combination of a western font for the heading and of a typewriter font for the text. All the promotional materials (with the exception of the single gig posters) were printed in one color —mostly on low budget digital printers or photocopier — on white or yellow coloured natural papers. The rough technique of ‘pasting over’ different sheets made it merely and deliberately ‘rude’.
With this concept we designed the main A0 calendar (which showed monthly all the events of the club), a monthly distribuited A4 leaflet, an A7 flyer, the members cards, shoppers and website. 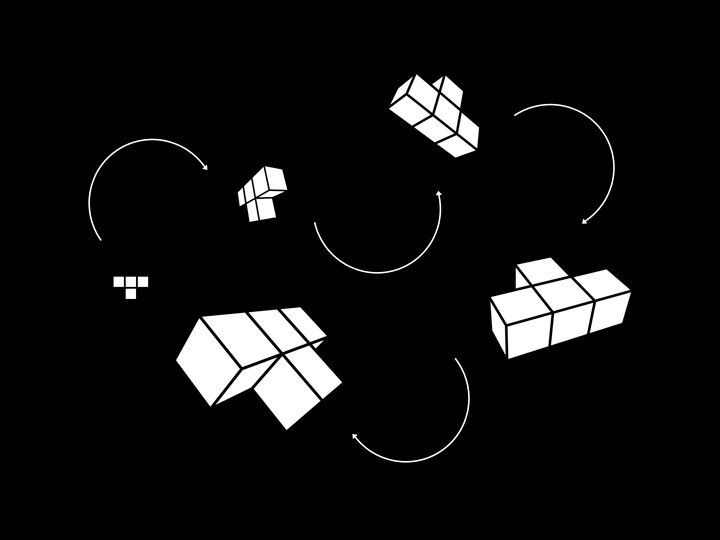 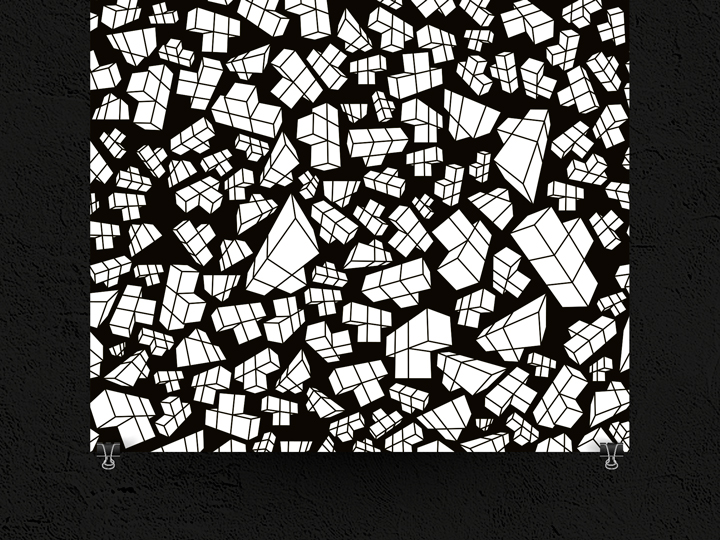 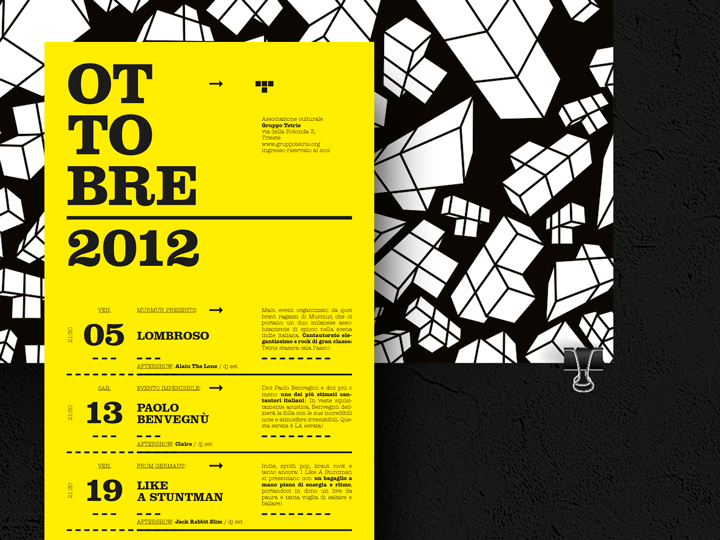 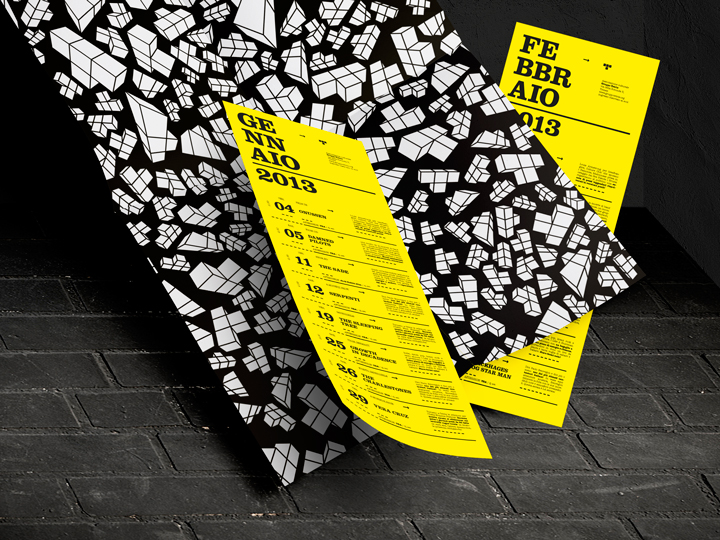 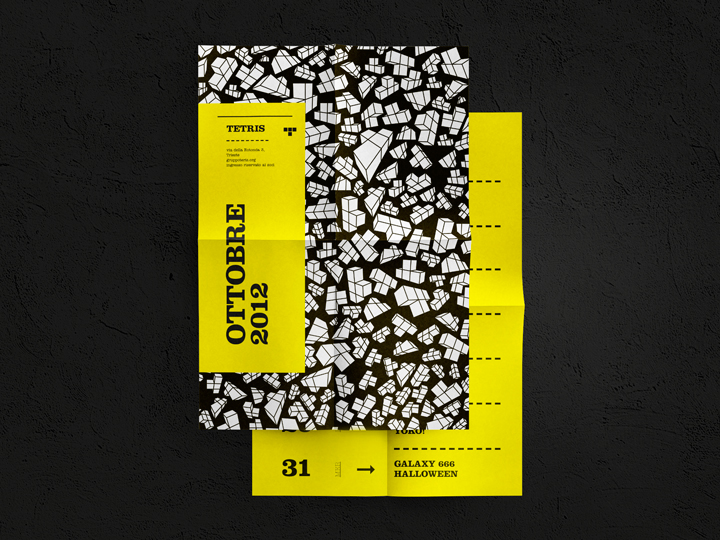 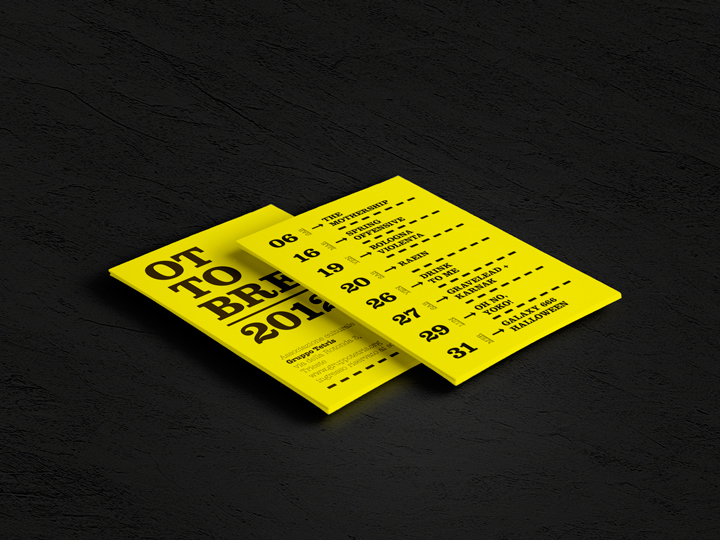 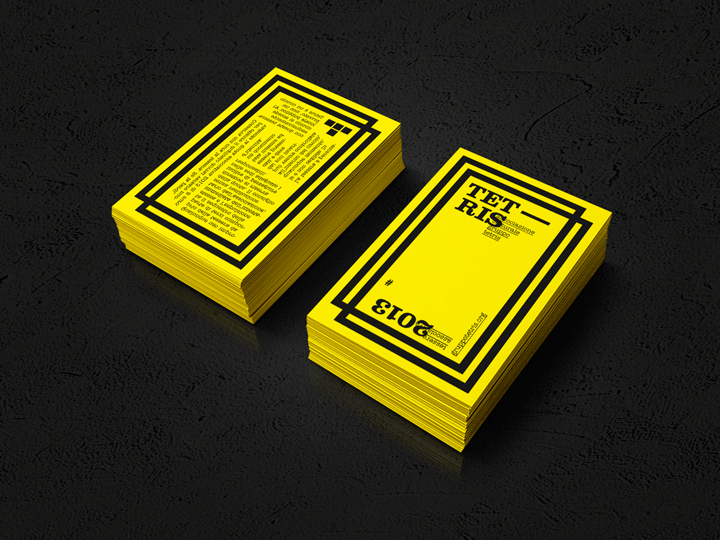 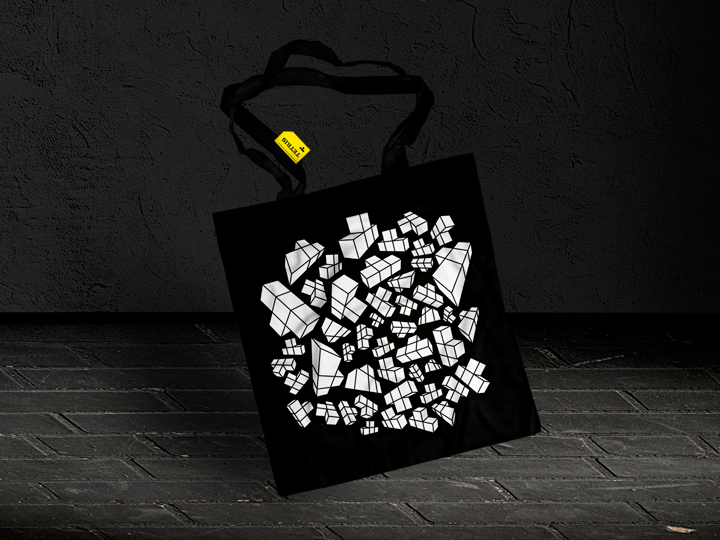 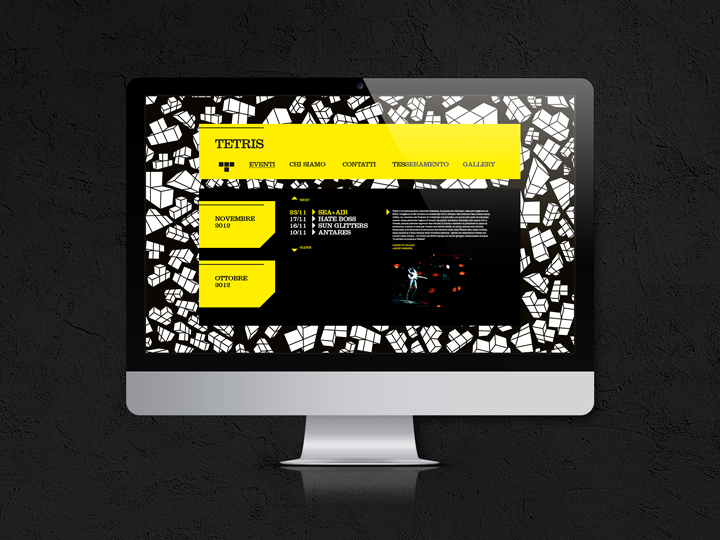 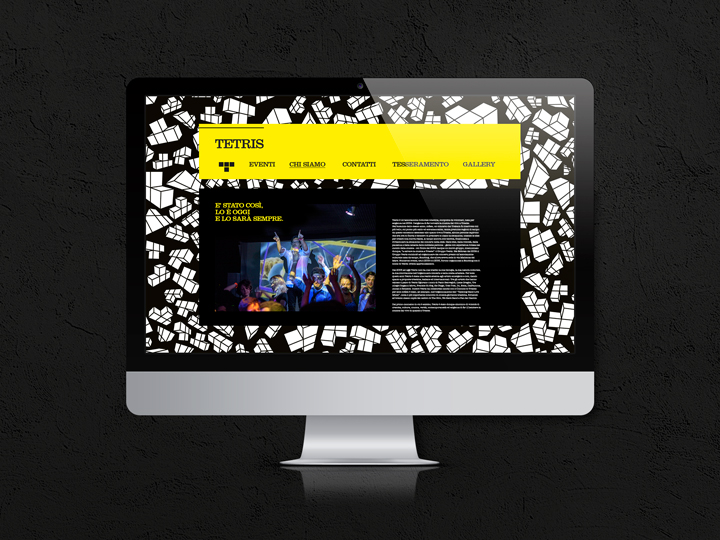 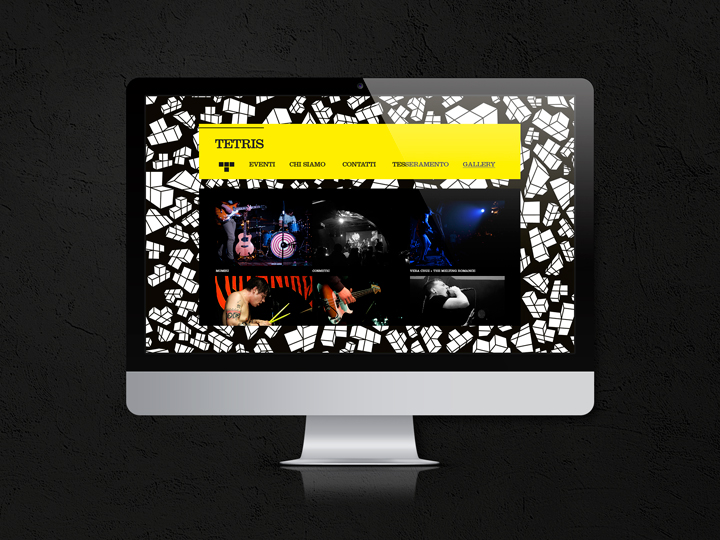 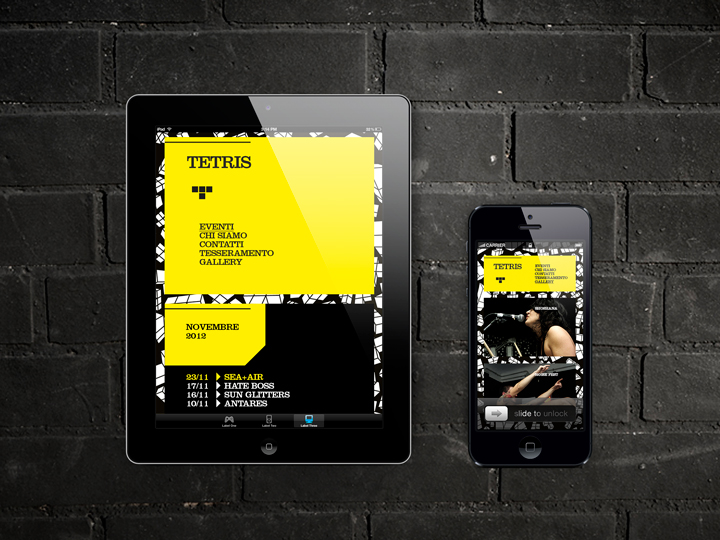 The singularity
of the single event posters

The identity presented here is de-facto a collective art direction, with only one ‘personal’ exception: the single event posters. Each designer was free to design the imaginary of the gig and express his own creativity (of course always by following the ‘yellow block’s grid identity rules’ that shows the artist name and the date). I decided to draw all the posters that I was destined to do with the same concept: surrealism playing on apparently out of context captures of fashion-female-models, making them strangely representative of the music played in the concert promoted. A strong retouching and a vivid colouring of the beauties photos give life to a series of graphics inspired dreamlike to various musical genres, all connected between them by its style. 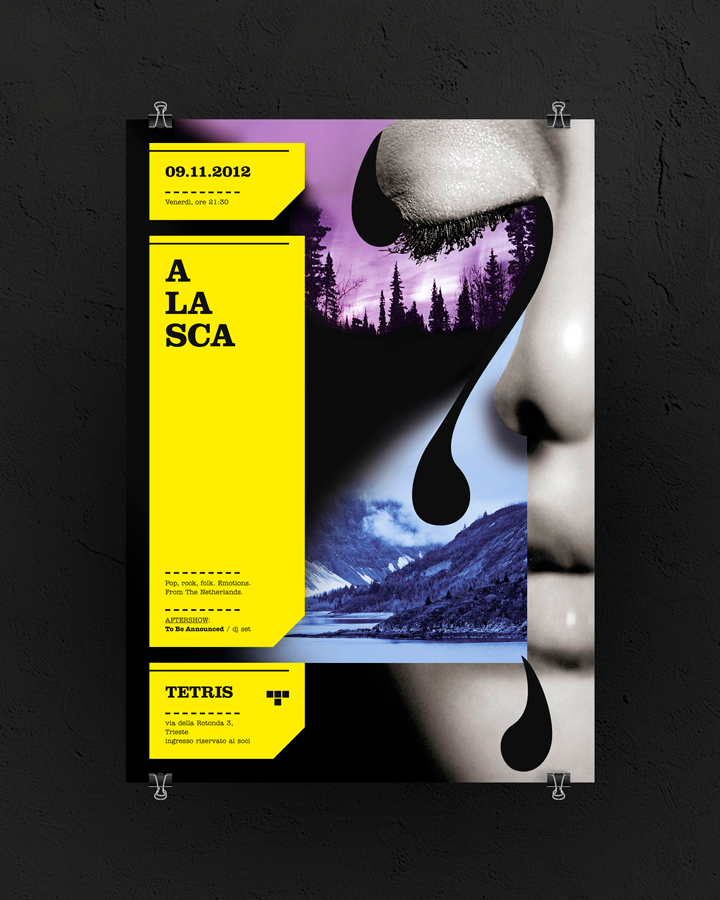 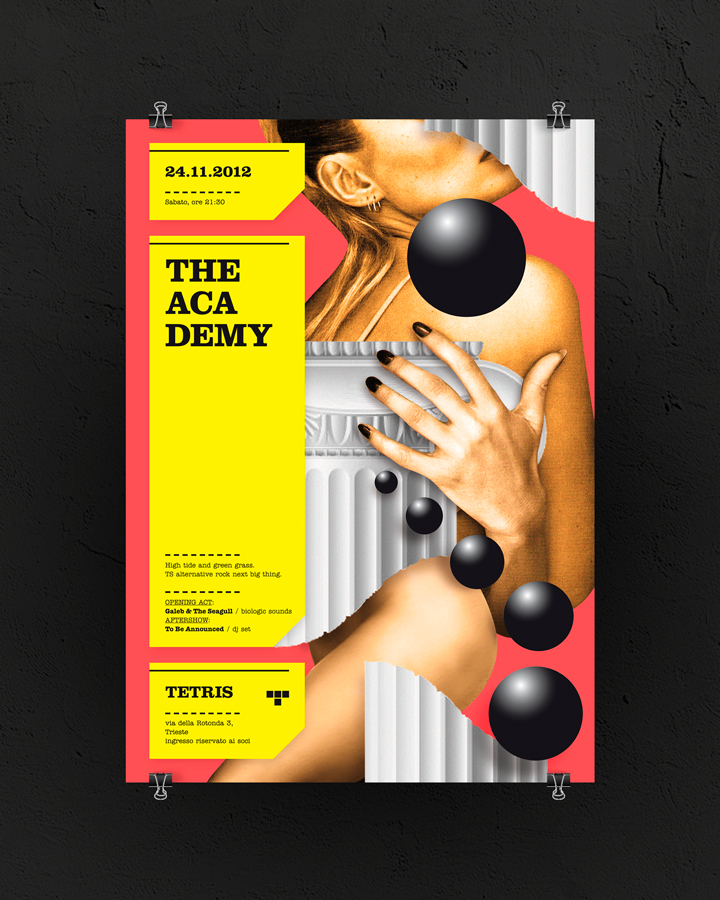 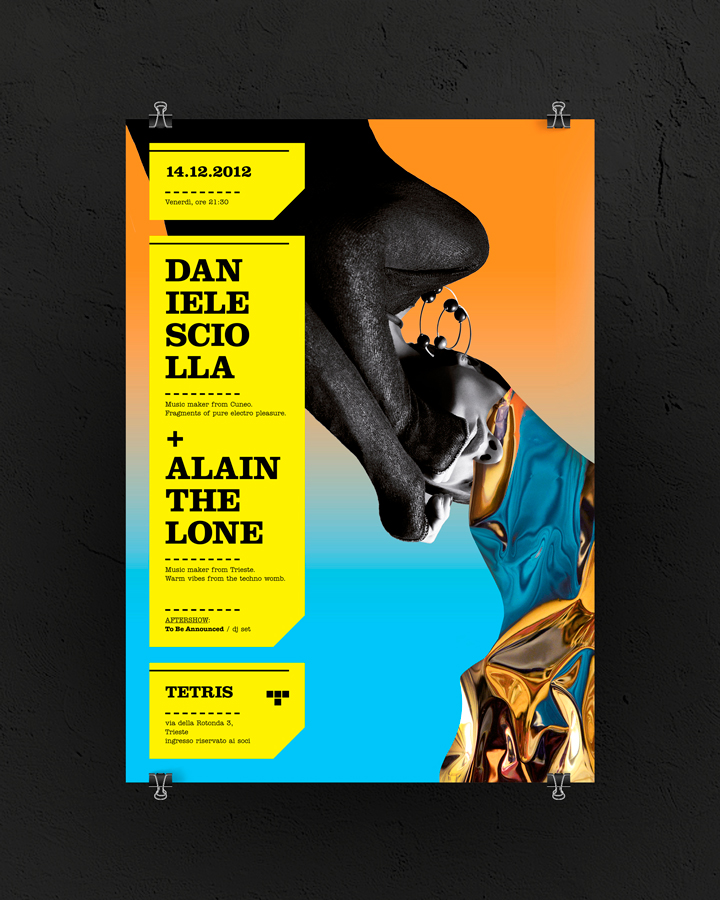 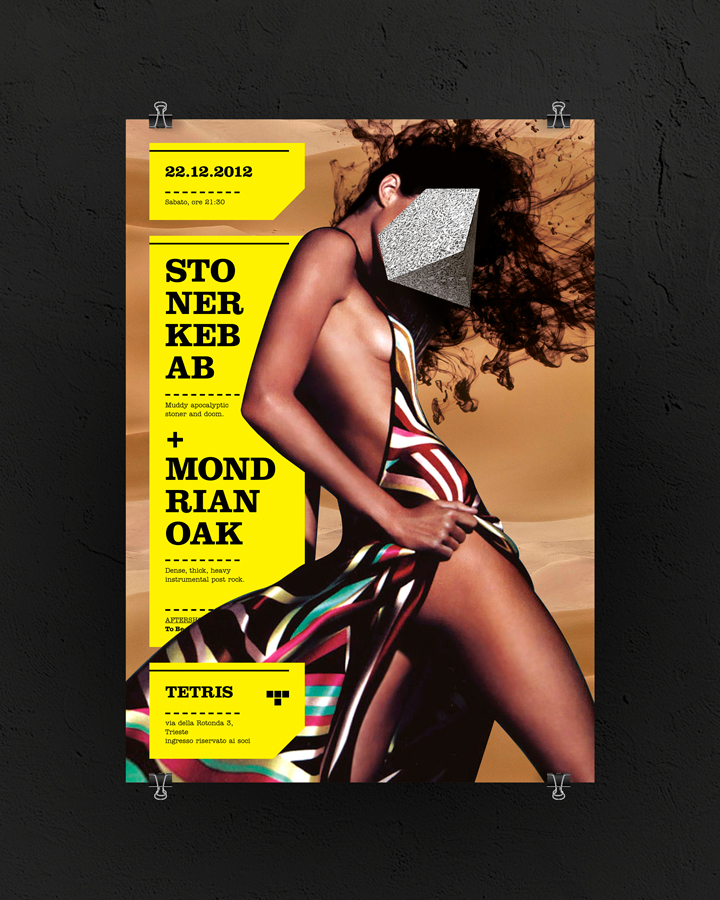 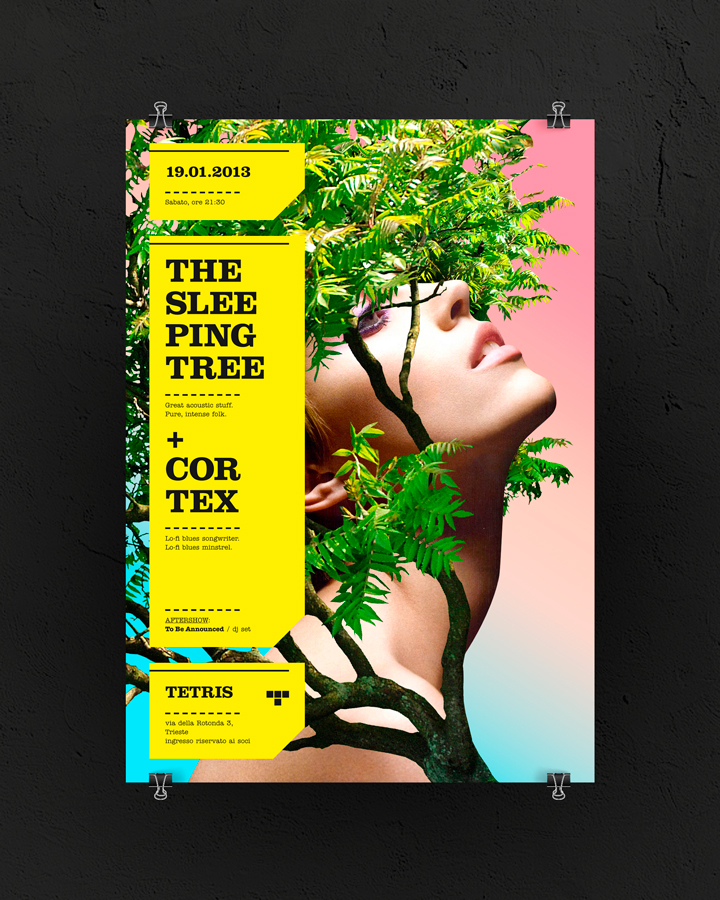 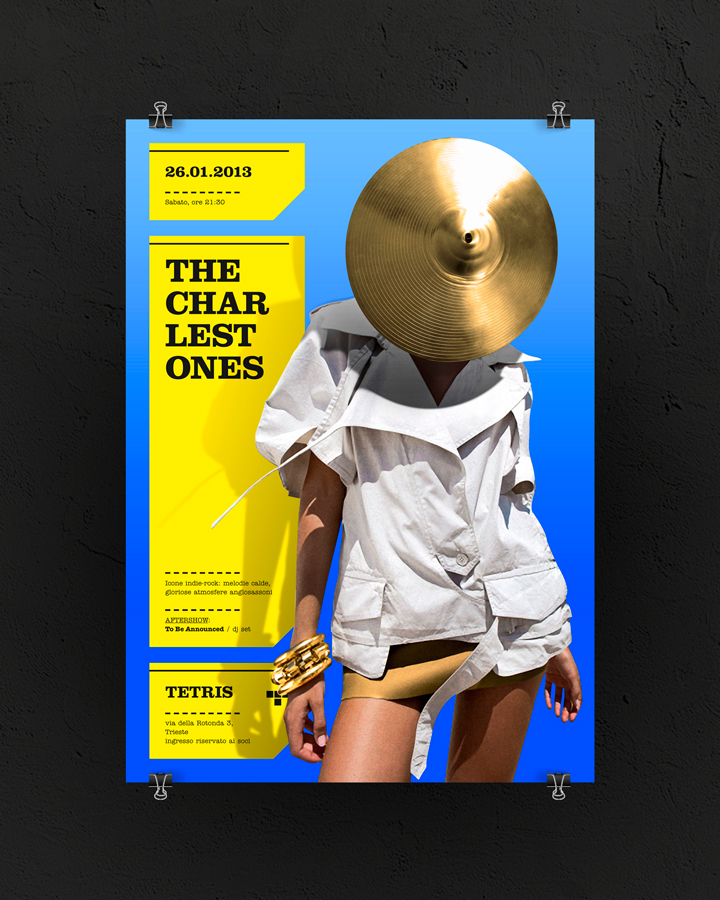 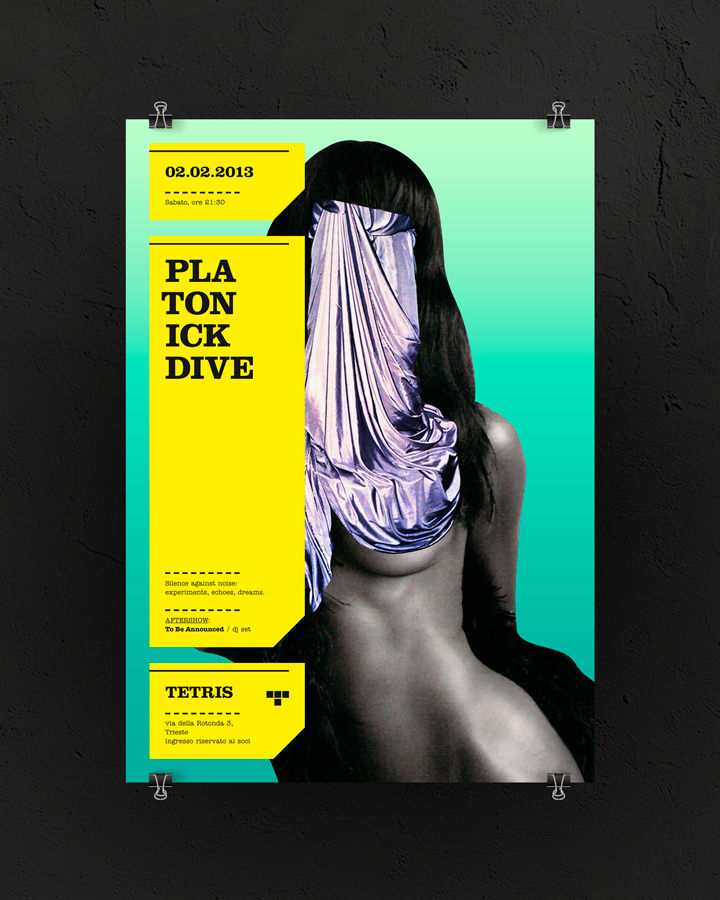 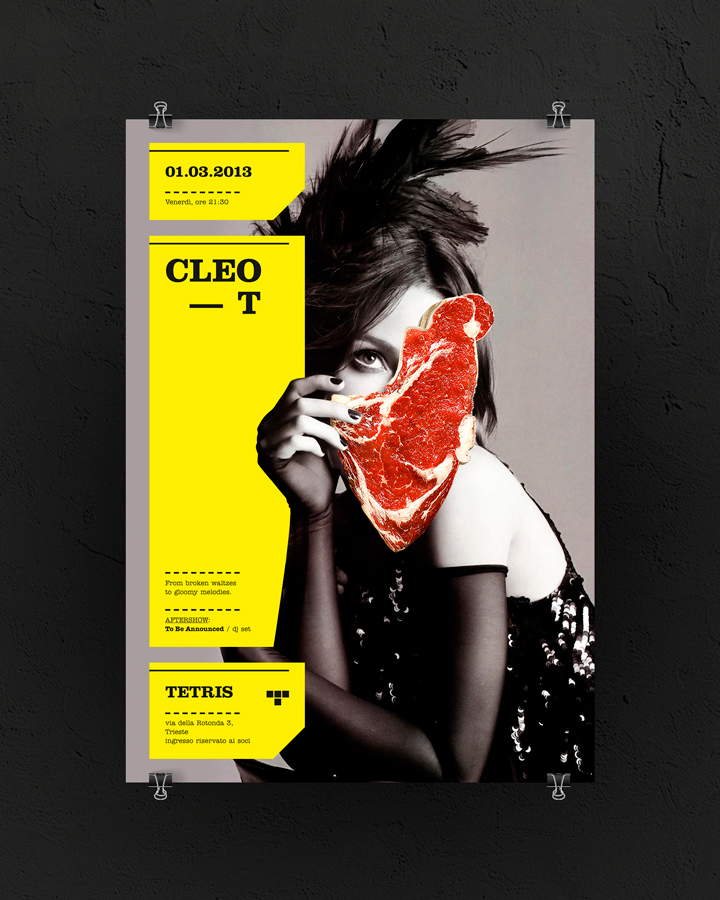 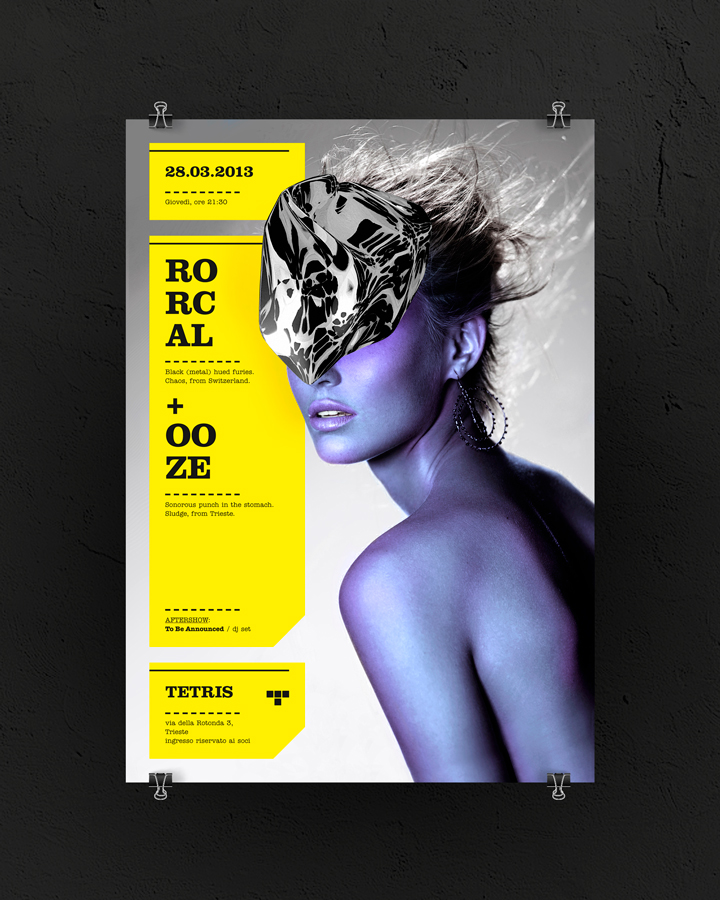 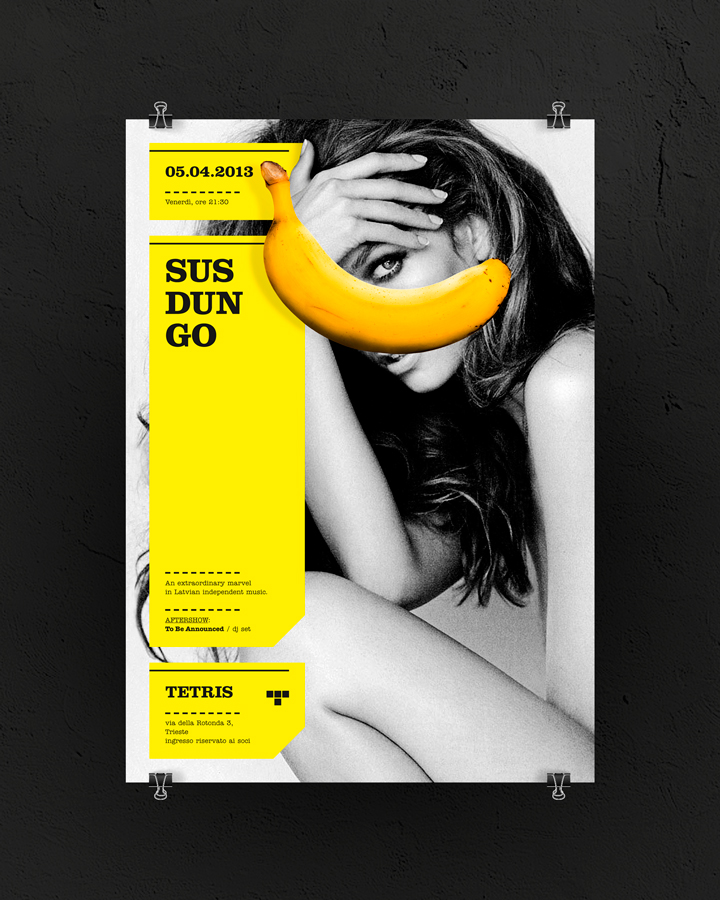 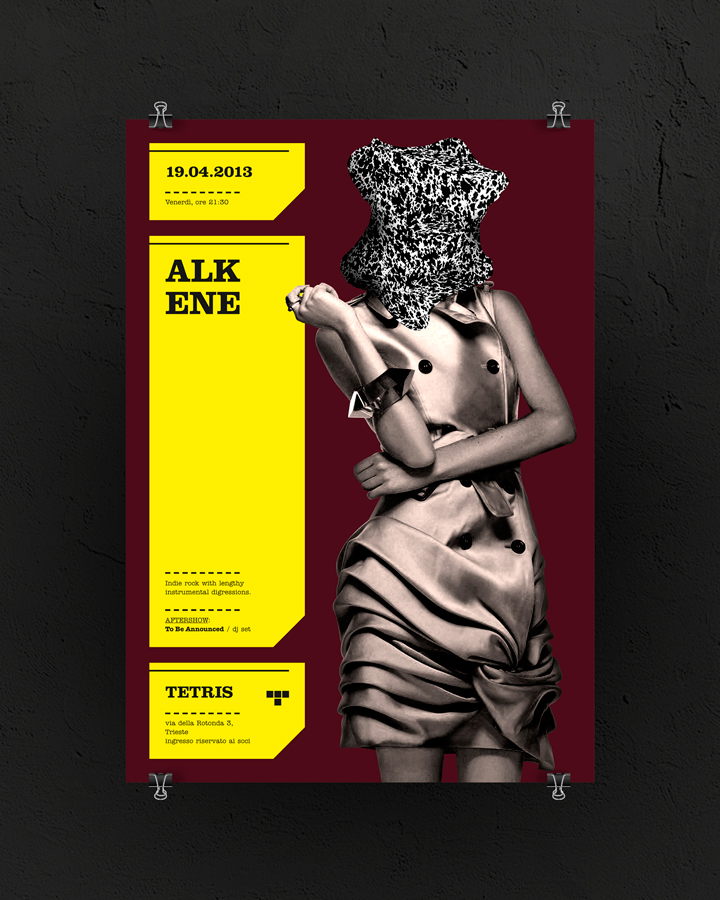 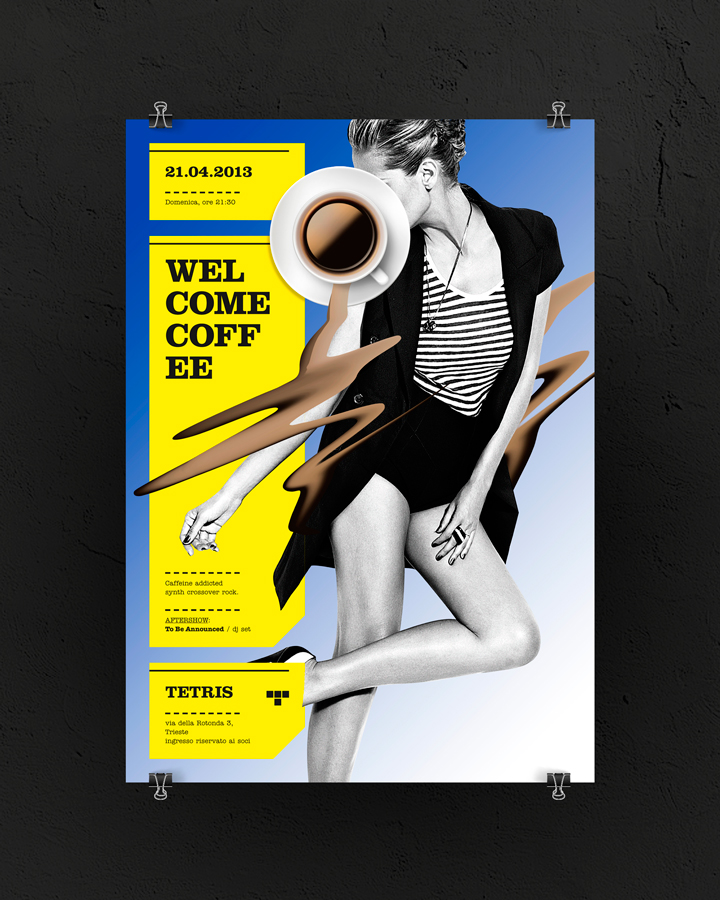 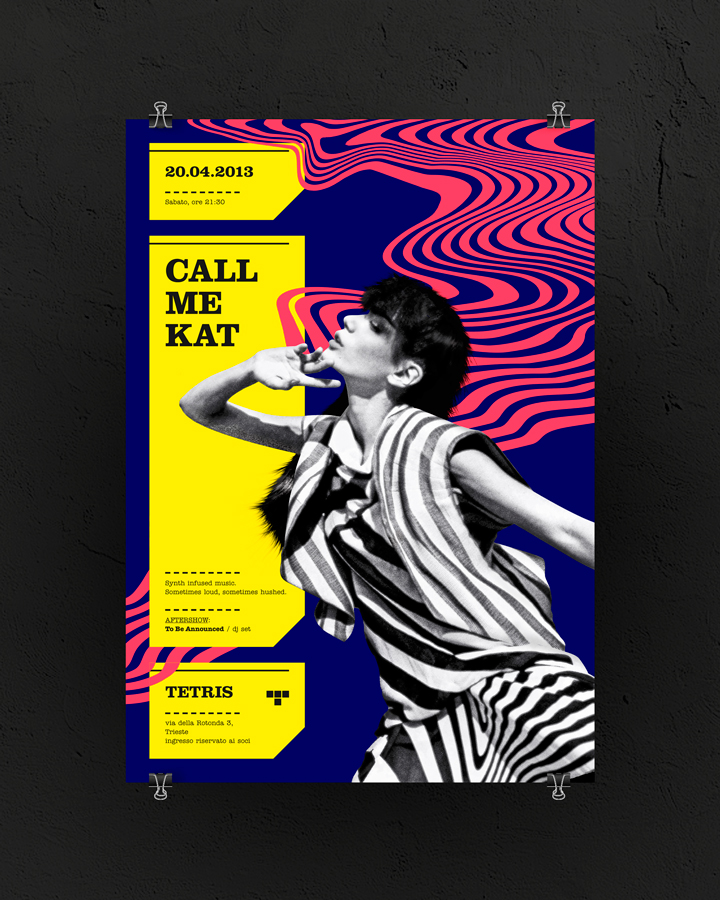 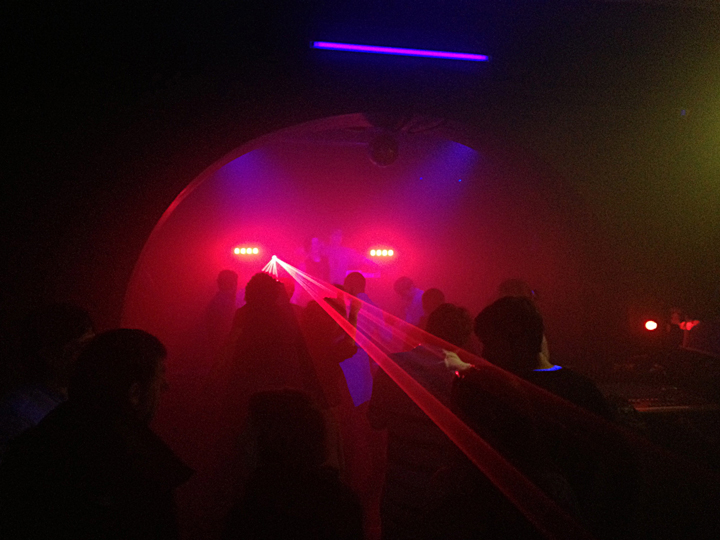 There was no remuneration for these works, all the stuff shown here is non commercial. The original images used for the gig posters are of Scarlet Johannson (Alasca), Kate Moss (The Academy), Victoria Adams (Daniele Sciolla), Gisele Bundchen (Stoner Kebab), Anja Rubik (The Sleeping Tree), Candice Swanepoel (The Charlestones), Naomi Campbell (Platonick Dive), Keira Knightley (Cleo-T), Bar Refaeli (Rorcal), Karlie Kloss (Sus Dungo), Alexa Chung (Alkene), Heidi Klum (Welcome Coffee), Sheila Marquez (Call Me Kat). The retouching made on these model’s pictures was intended as a homage, no profit earned by me from their processing. All the other photos in this presentation are property of Gruppo Tetris and some are made by Chiara Gulin.